Wyze pan cam is equipped with the latest AI features as it is supported by Alexa, Google Assistant, and also works with IFTTT. You can try saying “Alexa, show me the living room” or “OK Google, show the kids room. It works as a security agent for you, provides 360-degree coverage around it with 110-degree coverage covered per second. With 93-degree vertical coverage, there is nothing more we can ask for, also 1080p full HD video adds up to the features. It will automatically detect the motion and will follow it using its motion detection AI.

It is equipped with 6 infrared LED which enhances the night vision experience up to 30 feet away from the Wyze Pan Cam. Worried about kids or pets at home, Wyze Cam Pan also features dual-way audio which lets you communicate at the real-time and Class K amplifier provides high speaker volume. 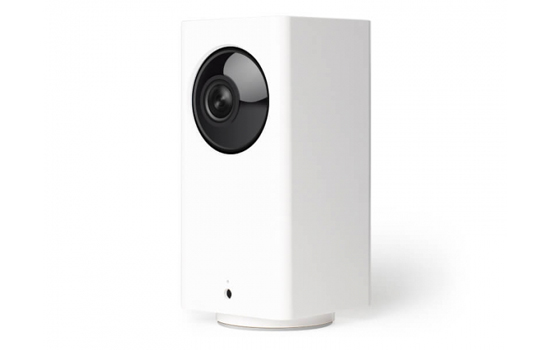 Wyze Pan Cam automatically records 12-second video when it detects motion or sound too. You can turn on the push notification to always get alert messages. Also, you are provided with 14 days of free AWS cloud storage without any monthly fees or subscription. You can install a micro SD card in your Wyze cam for local storage.

1. How can I mount the Wyze Cam Pan on the wall? Do I need to call an expert for this?

The mounting process is pretty simple. Just drill a screw into the wall and the camera will fit itself to the surface by virtue of its magnetic property. You may need to adjust often so as to dust it off and position it towards the customized zones.

2. Where can I watch the stored recordings later on? If the storage overflows, what will happen to Wyze Cam Pan?

Recordings are stored in the cloud for one week. Later they get overwritten. You can also save in a memory card inserted locally.

3. If I hang Wyze Cam Pan upside down, how can I flip the images?

Well, then you need to toggle the Rotate image 180 degrees on/off from the “Advanced settings” in your app

4. Can I use Wyze Cam Pan to monitor my kid from the office?

Of course, Night vision and customized zone help you to monitor any remote corner and human you left back at home while leaving for work. Just place it in the right position.

5. Is Wyze Cam Pan same as the Xiaomi Dafang camera?

Oh yes, you caught it right. OEM for Wyze is Xiaomi Dafang. But WYZE firmware works way better than the former. They run a profitable business by buying cheaper Chinese raw materials and selling in US markets.

6. Is the power cord of Wyze Cam Pan long enough?

7. Can my roommate also get access to the camera feed from her phone?

Yes, both of you can view the camera recordings on the same feed.

Unfortunately, Wyze engineers are working on this. As of now, Wyze does not support recording on a NAS device or integration with ONVIF.

9. Can I make Wyze Cam Pan work with Google Assistant?

Yes, you can easily integrate with Google Assistant.

10. How will Wyze Cam Pan record any suspicious movement?

By virtue of its Motion Tracking feature, Wyze Cam Pan auto-detects any unnatural moving object within its field of view. Owing to its Motion Tagging functionality, it can highlight movement during live streaming and playback. By means of Live Streaming, you can view real-time motion, and record videos or capture snaps.

Sorry, it does not work with the Echo Dot. But Alexa is enabled, only Dot cannot display you anything.

12. How can I mount Wyze Pan Cam upside down from the ceiling?

Wyze Cam Pan comes with a threaded hole towards its bottom of the base. this helps to fit into any conventional screw available on tripod mounts.

13. Can I use Wyze Cam Pan to keep an eye over my dog while I’m away from home?

Oh yes, it helps you to monitor your lovely pet remotely. But again it depends on the motion of the dog. If it goes away from the view of the camera, then Wyze has nothing to do with objects far away from its vicinity as it’s mounted on the wall and not moving like a robot.

14. How can I be on the same WiFi as the Wyze Cam Pan while I am away from home?

15. Can I integrate Wyze Cam Pan with smart appliances?

Connect it with Google Assistant or Alexa. Wyze detects your arrival from work and switches on the smart light. What else do you want!

16. Would this work as a security camera for your front door?

Yes, it can serve this purpose also but it is advisable to set up a fixed camera at the door like a doorbell.

17. What’s the capacity of a microSD card supported in Wyze Cam Pan?

Usually, a 32mb SD card is supported at max. You can insert a card with greater memory size but memory exceeding 32MB will remain unused.

No, it comes with the required USB data cable as part of in-box accessories.

19. I notice some delay in sound playback?

Delay in sound varies from user to user based on internet bandwidth. Normally there is 1s delay once recording starts. SIts design makes it skip half a second of any wake-up event.

The next generation of surveillance cameras has been unleashed with the arrival of the insanely multi-featured Wyze cam pan. This shy small tabletop pen holder – like a sneaky little box with a high definition 1080p HD camera is singlehandedly a whole room of surveillance cameras. It has a motor-driven lens that has a tilt and pan feature, literally giving you a 360° vision at all times from the comfort of your mobile phone screen. It also has a minimalistic design which doesn’t make it look like a surveillance camera in the least bit. Talk about stealth. Apart from that, the camera can also be your eye in the darkness. Equipped with infrared sensors, It gives you a highlighted night vision which is honestly a lot better than the gooey green night vision from the old surveillance cameras.

Well if you do feel like talking about being futuristic, this camera also features a two-way audio system which actually means you will be able to speak while you are looking at the live footage. A very casual way of scaring the soul out of the intruder eh?

Also, because there aren’t a lot of robberies going on every day the recorded footage of every day goes as a waste of storage. Well, never mind. Now, you can buy cloud storage from Wyze. You can buy space to store your recorded footage starting at 20 dollars for 10 days worth of footage which is quite reasonable. This camera is jam-packed with a purely futuristic approach to surveillance mechanisms. In addition to that, due to its reasonable and affordable price, puts forth the low rumble of a bombardment of competition that is about to drop on the international surveillance infrastructure market. It is a true invention in itself.

No comments to show.